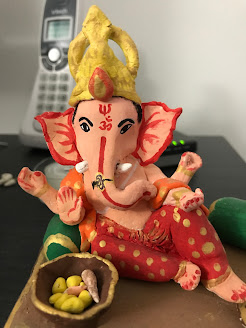 Ganesh Idol - 2017
Its that time of the year again! Whatever the circumstances, I cannot stop but feel the excitement about it. I agree things are going to be a bit different this year, but that is no reason to dampen our spirits and vigor. Each year we plead for Him to return again quickly and each year we set about doing the preparations for His welcome with equal gusto.

There are a lot of memories connected to these 11 days. Be it visiting our neighbors for the nightly aartis as part of the melee of kids excited about what will the prasad be on offer in each house or going around town watching in awe the huge idols and scenes erected by the Ganesh mandals. There were so many emotions invested, that on the 11th day when the idol was immersed we felt that somebody from the family was leaving us. The absence of the aarti and prasad on the next day left an inexplicable void for a few days.

This year there have been restrictions on community celebrations and rightly so. I do feel disappointed about it but it is what it is. I think we should take this time to pause and look within and realign ourselves to what these 11 days really signify. When Tilak started the practice of community celebrations of this festival it was with the intention of unifying us, to find common cause. Over the years we somehow deviated from that. Commercialism became rampant and somewhere the true essence of these celebrations was lost. Maybe this year affords us time to rethink and reapply ourselves to the ideal of community and togetherness if not physically then in our thoughts and actions.

My only wish is that this year on the 11th day as we immerse Him with our pleadings ,inviting him again next year, that He alleviates everything that ails us, makes us whole again and most importantly makes us realize that what humanity faces today and forces us to distance from each other is actually something which is bringing us together in more way than one.

This post took me the better part of 2 weeks to come with.

Its common knowledge amongst the folks who are in touch with us and who invariably end up liking my activity on ‘social media’ that Aatmay celebrated his 1st birthday on the 21st July.  However here I attempt to pen down what went into making the day memorable for us. I do say ‘us'. The first birthdays are more a celebration of the first year of parenthood than anything else. Heck, the kid wouldn’t even remember what his first few birthdays were like. So in effect the first birthday to put it bluntly was more like making sure that we as parents did everything to ‘pat’ ourselves on the back. Ohh, and I think we sure did a good job.

The monthly birthdays are an integral part of the first year birthday celebrations. A picture is captured on the day of the month the baby is born each month of the first year. The Mrs, month in and month out meticulously planned for this picture, adhering to a theme each month. A few examples below:

3rd month : October – the picture had a reference to pumpkins

4th month : November – the picture had a reference to turkey

More efforts were needed to pull off the poses appropriate for the themes. In my opinion the pose for the 11th month (International Yoga day) was the most challenging to capture.

Much closer to the big day, the prep started in right earnest. The theme for the birthday celebration was to be 'Nautical'. A sailor's dress was shortlisted and ordered from Amazon along with some accompanying decoration inline with the theme. The Mrs took it onto herself to bake the birthday cake trying her hand for the first time with fondant and what not. Before you say I seem to have done nothing, let me clarify that I did take 2 days off work to be of use.

As a curtain raiser of sorts, we had a cake-smash. A small cake with lots of cream was made and placed in front of Aatmay who was dressed in his diapers only. The idea was to record Aatmay simply attack the cake and make a mess. He relished the cake and enjoyed it to the fullest.

On the day of the birthday, a couple of Zoom calls were lined up for folks back in India to wish Aatmay and also become a part of the celebrations. The Zoom calls made us realize that going virtual actually enabled more people to share in our joy. The evening was spent with a few friends who attended in person and was capped off with the Hara Bhara kabab and Pav Bhaji which the Mrs whipped up.

In summary, I would say that the day itself was exhausting but it was totally worth it. Another blog is needed to talk about my personal experiences of parenthood/fatherhood in this past year. I leave you with some glimpses of the birthday. Hope you like them.

A short compilation video of the monthly pics. We played this at the start of the Zoom calls to set the mood. 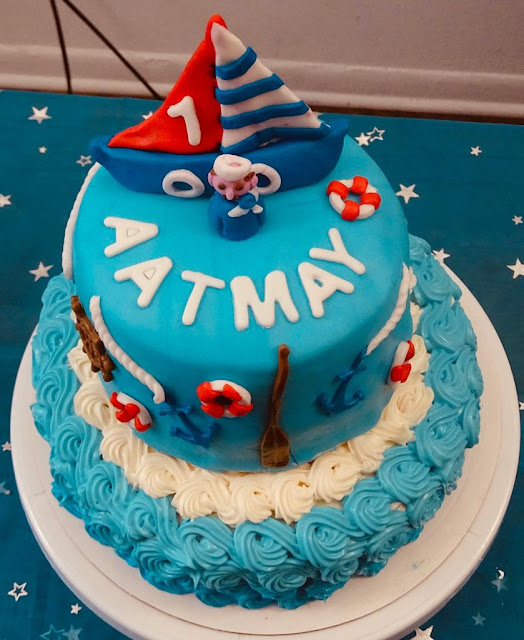 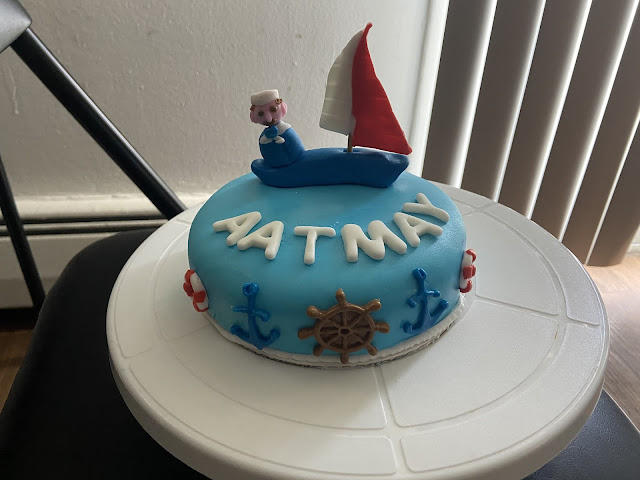 The Zoom call birthday cake (this was cut in the morning) 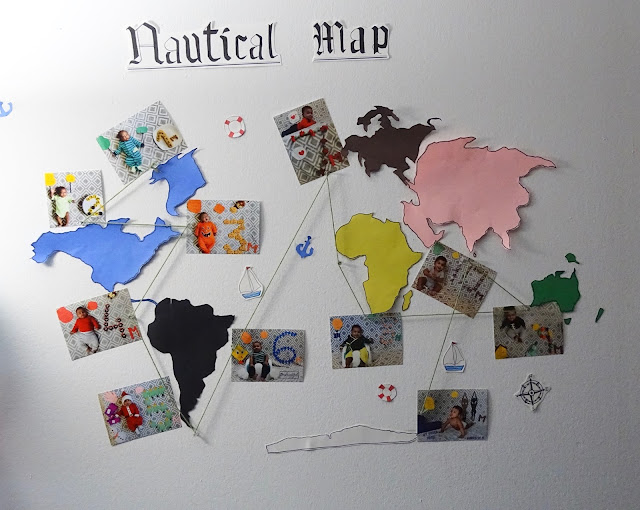 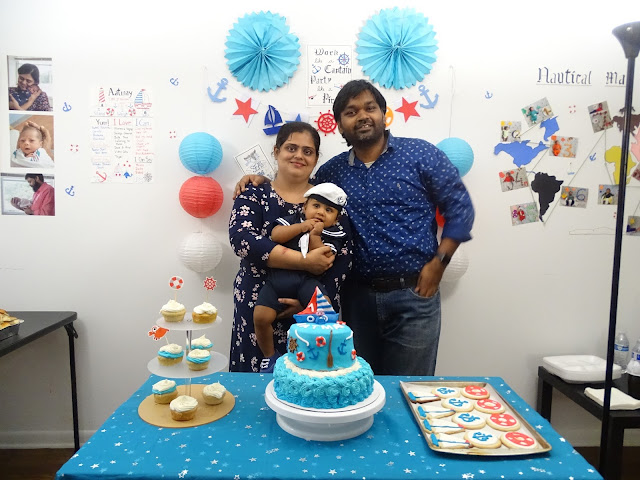 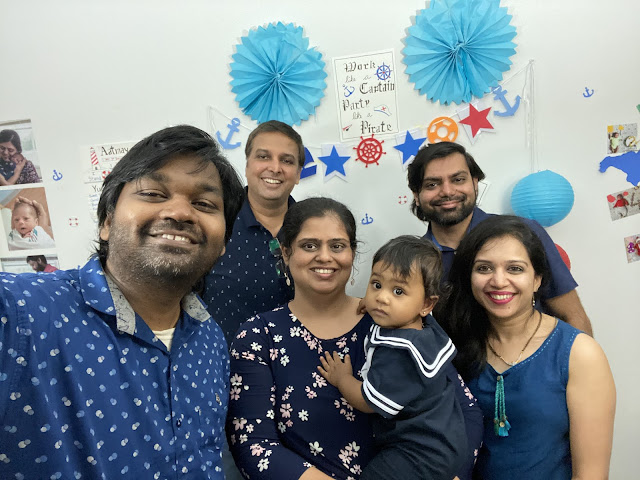 The little one celebrated his 1st birthday last week. He isn’t much of a little one now, so have to rack my brains to come up with a new pseudonym. Until then there is something else to share and talk about.

A couple of weeks before the International Yoga Day (21st June 2020), I decided to try my hand at Suryanamaskar (SNM). The last I ever performed a SNM was way back in school. If I remember correctly it was in the summer camp when I was 10-12 years old. So after a gap of little more than 20 years I decided to give it a go again. By the time Yoga Day came around, I had the technique down and was comfortable doing 12-14 rounds of SNM and that is when it struck me. I could build my SNM practice to perform 108 SNMs by 21st July 2020 which would also coincide with the 1st birthday of my kid (the aforementioned ‘little one’).

I was surprised with the way my mind worked to not only decide this but the determination I felt when I set out doing this was something which I have seldom experienced in my life. Fatherly instinct anybody? Though the Mrs had her reservations as to how me doing 108 rounds of SNMs had to do with me being a father. However I digress from the topic.

Some research on the internet yielded a schedule which if followed would help me reach the goal in 4 weeks and so began my journey to 108. It was exhilarating to say the least. The first week where the schedule demanded that I increase the rounds daily was grueling considering my body was not used to the level of physical activity demanded. Soreness was a constant companion for the better part of 2 weeks. From the third week onward my body, now used to the daily rigor, was up for the task. Towards the end of that week, for the first time, I enjoyed the practice from start to finish. The 4th week was all about mind over body, where I just had to be present on the mat long enough to ultimately get through the 108 rounds. I achieved the feat on the morning of 18th July, 3 days before the deadline. There after I repeated the 108 rounds daily till the 21st July.

Every day through those 4 weeks I felt myself progressing both in the mind and the body. As I had read in the articles during my research about planning to do 108 SNMs, I could understand what was meant by peeling of layers from oneself as the practitioner progresses and reaches the said goal. However hard I try to express the precise feeling, I fail and only wish that you too undertake this journey and experience it firsthand.

Thanks are in order to Aditya Gund – a good friend who is a source of inspiration and dare I say peer pressure rolled in one; Priyanka Gadekar – whom I have not met in person yet, but is only an Insta chat away for anything yoga. Last but not the least; the Mrs – for the patience she showed when I complained non- stop about my sore body and how I would be able to do only so much with regards to helping out with the little one. 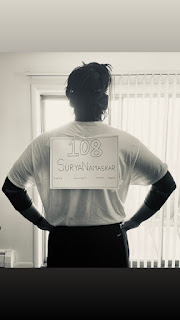 When in doubt, ask.

Just the other day, a friend forwarded me an audio clip of a conversation between a lady and a doctor. The lady had called up the doctor to enquire if one can contract the coronavirus over the phone by talking to a CoVid positive patient. Predictably the doctor could not control his laughter and asked her about the source of this information. The lady candidly confessed that it was her mother who said that, and she, having her doubts thought it best to fact-check with the doctor. The doctor told the lady that the virus does not spread over the phone and if that would have been the case, then he should have been dead by now owing to the fact that he talks to CoVid patients day in day out.

This clip did leave me in splits but when I gave it more thought, I ended up doffing my hat to the lady. The fact that she decided to call the doctor (a competent person) with this question (however stupid it may seem to us), instead of taking it at face value and maybe spreading (mis)information forward deserves a lot of credit.

In today’s age where information is being made palatable to suit our tastes, the line between fact and fiction has become blurry making it imperative for us to question. Often times we are bogged down  with thoughts like “Is my question intelligent enough?”, “Will I seem stupid posing the question?” etc. Our best interests lie in getting rid of these thoughts and forging ahead with getting the answer to our question. The worst that could happen is that you might not get an answer but you will still be free to ask again to someone else.

As a kid I was always encouraged to question and also to first try and find the answers myself. The rationale which later became clear to me, was that the added effort put in finding the answer made sure that I treasured it.

Now when I listen back to the audio clip, I am sure that the lady would spread the right information and at the same time encourage anybody and everybody to question. Just imagine the positive change asking a question would bring about then.

The Story till now...